Every smash hit gets a sequel. So after the success of the “Rumble On The Row” in 2019, producers rushed to capitalize on its success. Of course the world ground to a halt in the spring of 2020 and the sequel looked like it may go the way of “Con Air In Space” and never see the light of day. Not to be deterred, the sequel to the “Rumble On The Row” simply titled “Rumble II” will live as a one night only concert event on Saturday October 23rd! This version will feature familiar heroes Andrew Deerin Featuring the DeVilles and will introduce a new villain, legendary late 90s DC Rock band UTRIS. This event will surely be the title bout of the year. Get your tickets early. This event is sure to sell out. 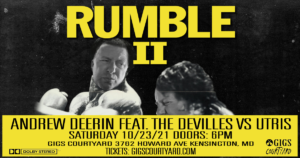