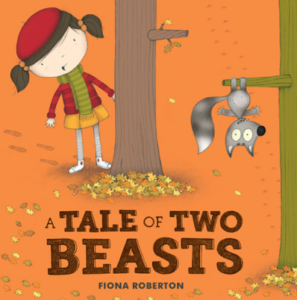 Described as “totally delightful” in a starred Kirkus review, A Tale of Two Beasts describes an encounter in the “deep dark woods” from two different points of view – that of a little girl who discovers a strange creature and “rescues” him, and also that of the woodland creature who gets “ambushed” and taken away. Humorous illustrations invite children to see differences in the stories, and to appreciate the happy ending.

Families can also find crafts related to A Tale of Two Beasts in a bin at The Noyes Children’s Library (10237 Carroll Pl., Kensington, MD) and by clicking on the images at the bottom of this story.